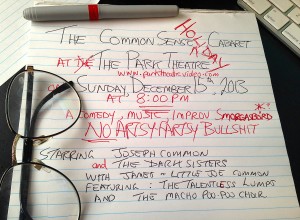 The Common Sense HOLIDAY Cabaret is an evening of comedy and music in the style of an old-school TV variety show redesigned for a modern audience.

It’s a comedy, music and improv smorgasbord.
The jokes will be funny & the music will be good.
Interesting people will do interesting things.
There will be no Artsy-Fartsy bullshit.

The show is a live variety show in two acts modeled after TV Variety shows of the 60s and 70s, most specifically the old Dean Martin Variety show. The Common Sense Cabaret is an entertaining a mix of sketch comedy and music with some improv and novelty acts thrown in.

The host is the old-school, has-been, local celebrity, Joseph Common, (played by John B. Lowe) Joseph is reluctantly supported by his extended family of entertainers. Joseph’s singing nieces, The Dark Sisters are featured performers, (played by Sarah Constible, Trish Cooper and Erin McGrath) along with Joseph’s brother, James and his son, Little Joe, (Randy Apostle and Cory Wojcik). The Talentless Lumps and the Macho Poo-Poo choir are also scheduled to perform.

Tickets are 15.00 and available at The Park Theatre